SHRF condemns the Burma Army’s provocation of fighting with the Restoration Council of Shan State/Shan State Army (RCSS/SSA) in Mong Kung, central Shan State, despite the RCSS/SSA signing the Nationwide Ceasefire Agreement. The fighting has involved shelling of civilian areas and displacement of about 2,000 villagers since the start of October 2016.

On October 1, about 40 Burma Army troops from IB 292, based in Nawng Wo, Lawksawk township, arrived without warning in the village of Pang Poi, about 25 miles north of Mong Kung town, and released 24 people being kept in the RCSS’s local detention centre for drug offenders. When RCSS troops based nearby came to intervene, fighting broke out from 4 to 7.30 pm.The next day, about 200 Burma Army troop reinforcements were sent in from the Na Boi army base in Laikha township, leading to further clashes with RCSS near Koong Sar village, about one mile northeast of Pang Poi. Two Burma Army helicopters also flew over the area. This caused over 700 villagers from Pang Poi (including 15 pregnant women), as well as about 200 villagers from the nearby villages of Nar Loi, Wan Mong, Hoi Jik  and Koong Sar to flee to seek shelter in temples in Tong Lao, about 1 ½ miles east of Pang Poi. About 1,000 Tong Lao residents also went to sleep at the temples at night as they were afraid that fighting would spread to their village.

On October 3, the IB 292 troops retreated from Pang Poi village, escorting the 24 detainees and two warders to the LIB 505 base in Namlan, about 20 miles north. The Burma Army troops then fired mortar shells at Pang Poi village, damaging housing and vehicles.  The detainees, including six women, were made to walk between the Burma Army troops, apparently as human shields to prevent RCSS attacks.

On October 4, about 180 more Burma Army troops were brought in from Mong Pai (on the Shan-Karenni State border) to Tong Lao, making many of the villagers too afraid to return home.

On October 7, the detainees were all released. However, the two civilian warders of the detention centre — Sai Kyaw Lu, age 18, and Sai Aung Myint, age 40  — are still being detained at the LIB 505 base in Namlan. On October 9, the Pang Poi headman, the Tong Lao headman, an SNLD MP from Hsipaw, and the Namlan administrative chairman went to request the release of the two warders from Namlan IB 243 base. However the commander said he could not release the two men without the permission of the regional commander. The families of the two men are extremely worried about what will happen to them.

SHRF calls for the immediate release of the two warders, who have committed no crime and who were serving their community in running the detention centre, and calls on the Burma Army to stop provoking fighting, withdraw its troops from this area and allow the displaced villagers to return home safely. 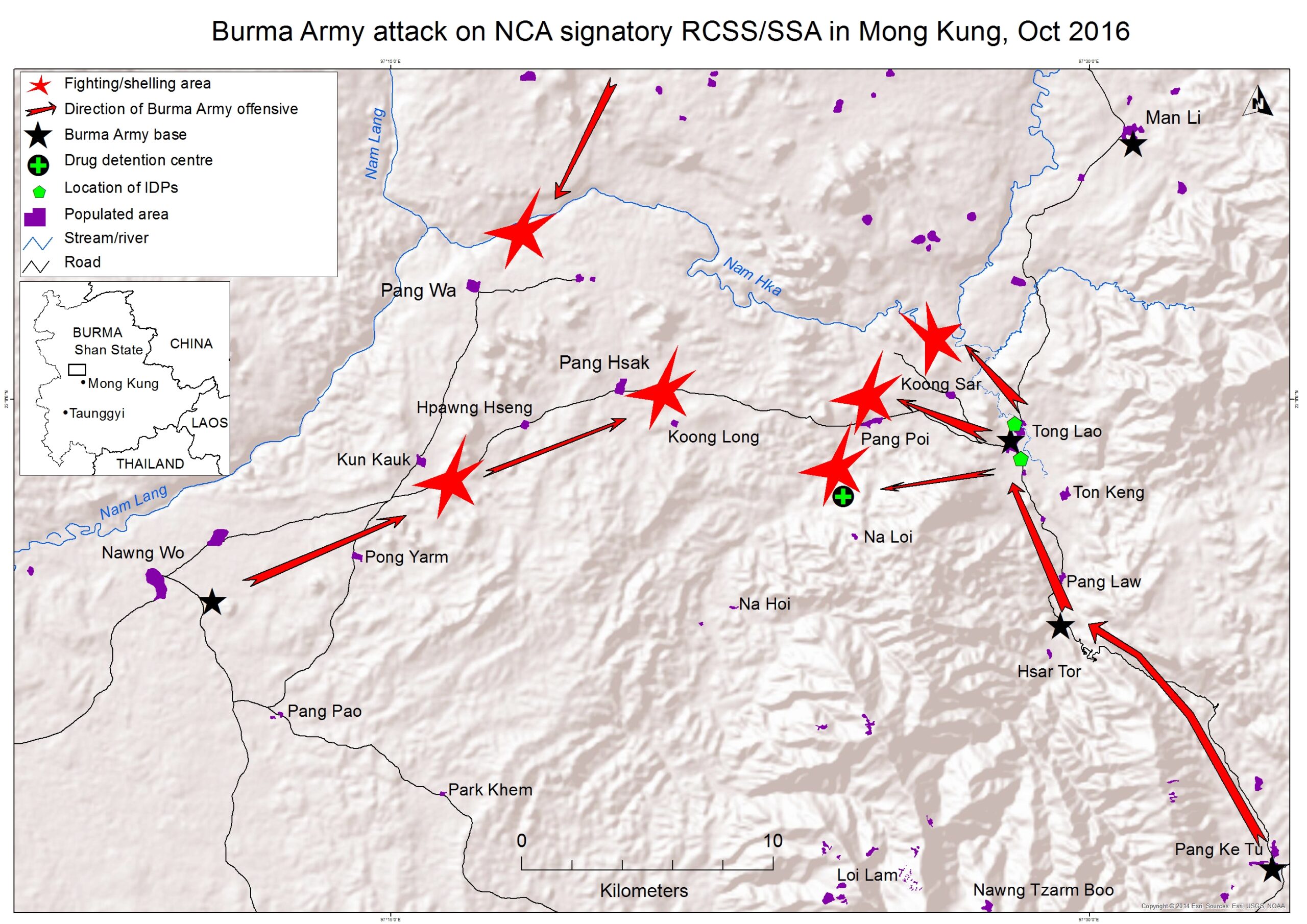 The detention centre in Pang Poi was set up by RCSS at the request of the local community, who were concerned at the increasing availability of drugs and high rates of drug addiction in the Mong Kung and Namlan areas. Methamphetamine (“ya ba”) pills are cheap and easily available, meaning that even  children as young as 10 years old are taking them. The cost of a methamphetamine pill is only 150 kyat (about USD 0.12).  Adult drug dealers and users have been detained at the centre for 5-6 months.

The list of those who were detained at the Pang Poi centre on October 1 is below. On 9 June 2016, Tun Tun Win, the 21-year-old son of the Burma Army IB 292 commander, had been arrested at an RCSS gate for carrying about 20 methamphetamine pills and placed in the detention centre. However, he had broken out of the centre on September 22, 2016. This appears to have been a reason why the IB 292 commander authorized the raid on the detention centre on October 1, 2016.

The numbers of displaced villagers sheltering in Tong Lao on October 11, 2016, was as follows: