During April, a farmer was tortured and killed, and hundreds of villagers used as forced labor by the Burma Army, as it stepped up operations against ethnic resistance groups east of Lashio, northern Shan State, despite the urgent need to focus on preventing the spread of COVID-19 across the country.

Since the Burma Army disarmed the pro-government Kawng Kha militia, based in Kutkhai township, in the last week of March 2020, it has been sending in reinforcements to occupy former militia-controlled areas. In eastern Lashio, hundreds of “shock troops” from Infantry Division (ID) 99 have been deployed to occupy the former Kawng Kha militia camp at the Kachin village of Pang Haew, about 50 kilometers east of Lashio town, and patrol the surrounding areas.

On April 21 and again on April 28, ID 99 and LIB 365 troops forced car owners from Mong Gaed, 60 kilometers east of Lashio town, to use their vehicles to transport military supplies to the former militia base at Pang Haew.

Mong Gaed is where SHRF reported in February 2020 that hundreds of villagers were being forced to provide bamboo and wood to build a new Burma Army new tactical command base. On April 8 and April 21, Mong Gaed villagers were again forced by LIB 365 to provide over 100 bamboo poles for the new base.

On April 24, Burma Army troops from ID 99 were patrolling around Mong Yaw, 40 kilometers east of Lashio town, after a clash with the Brotherhood Alliance, when they met a 27-year-old farmer from Ho Ser village, who was returning from tending his cattle. They beat him and shot him dead, about two kilometers southeast of his village. His family found his body on April 26, half-buried beside the road, with bruises along his sides, and gunshot wounds in his abdomen.

Mong Yaw was the site of the well-publicized extrajudicial killing of seven villagers by Burma Army troops in June 2016. About 100 troops from LIB 362 shot dead two farmers riding motorbikes, and arrested and shot dead another five villagers, putting camouflage uniforms on three bodies to falsely frame them as resistance soldiers.

SHRF deplores the Burma Army’s ongoing torture and extrajudicial killing of civilians, and ongoing large-scale use of forced labor. Especially during this critical time, when villagers are struggling to survive amidst the Covid-19 lockdown, the Burma Army should be helping protect them from the pandemic, rather than placing them in greater hardship and danger, and squandering the country’s budget to tighten the military’s grip on power. 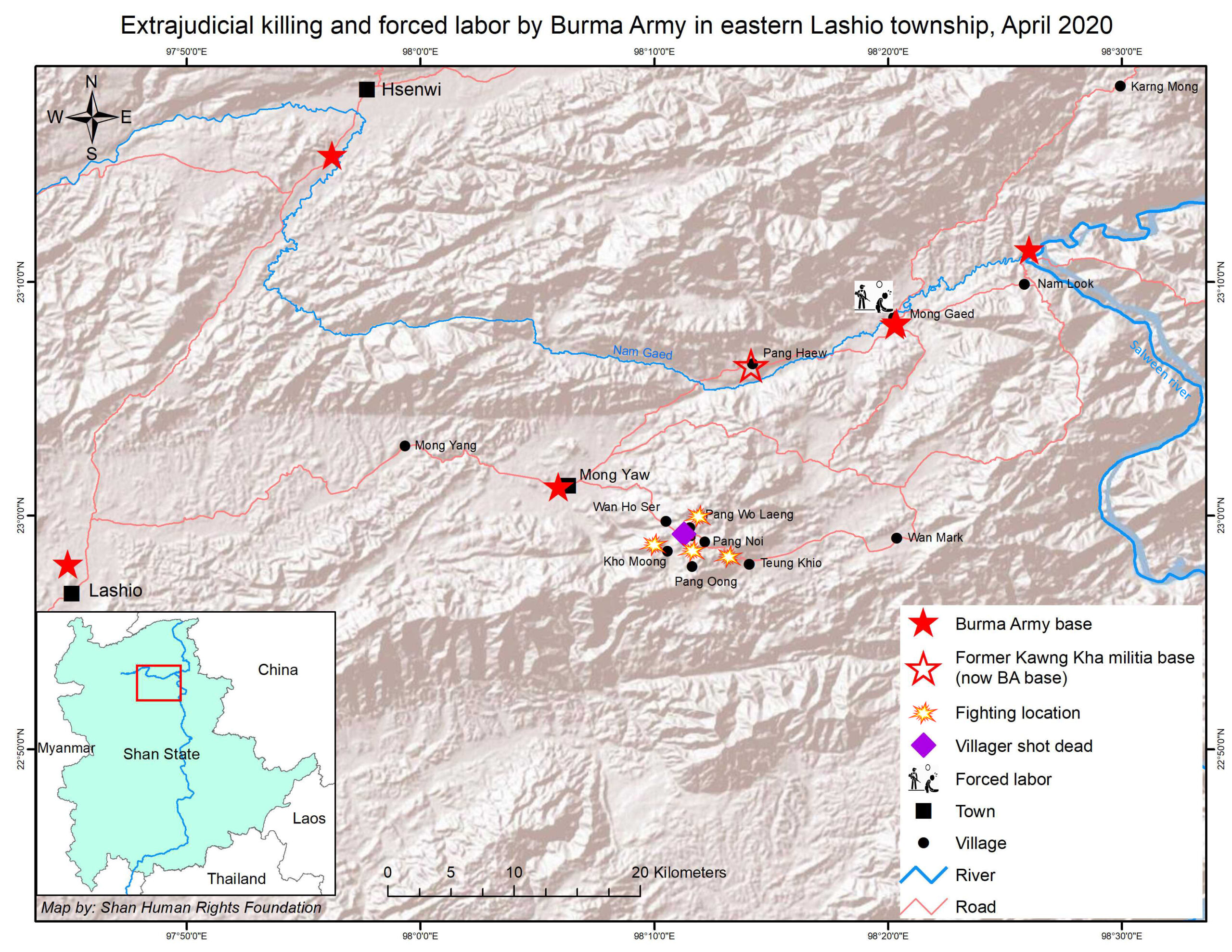 On April 21, 2020, about 200 Burma Army troops from ID 99 forced four car owners from Mong Gaed village tract to drive to Mong Gaed temple and wait on standby to transport military supplies. The car owners were ordered to spend the night with nearby relatives, and wait in the daytime together with the troops at Mong Gaed pavilion.

On April 23, the car owners were forced to transport military rations to the former Kawng Kha militia base at Pang Haew village, about 12 kilometers west of Mong Gaed. After this, they were allowed to return to their homes. They were not paid for this work, and no money was provided for petrol. When one of the drivers had difficulty starting his car engine, the troops threatened to burn his vehicle.

On April 28, the locally stationed Burma Army LIB 365 troops under ID 99 control, summoned two small trucks from Mong Gaed tract. They forced the owners to transport rations as well as troops to their new base at Pang Haew.

Since the start of the year, vehicle owners in Mong Gaed have been frequently ordered by the Burma Army to transport troops, rations and equipment, in different directions: west to Pang Haew and Mong Yaw; north to Karng Mong; east to Nam Look on the Salween river bank; and south to Wan Mark.

On April 21, Burma Army troops from LIB 365 ordered villagers of Mong Gaed tract to provide over 100 bamboo poles for the ongoing construction of their new tactical command base at Mong Gaed – each of the eleven villages in the tract had to bring ten 7-meter-long poles. Villagers had to carry the bamboo poles on their shoulders and take them on foot to the military base.

On April 8, the troops had similarly requisitioned bamboo poles from the Mong Gaed villagers.

The Burma Army has been building their new tactical command base in Mong Gaed since late 2019 and has been forcing local villagers to provide bamboo logs and poles for construction of the base until the present.

On April 24, Burma Army troops from ID 99 were patrolling around Wan Mark village, Mong Yaw tract,  east of Lashio town, when they encountered Brotherhood Alliance (TNLA and MNDAA) troops between Teung Khio and Pang Noi, southeast of Mong Yaw. Fighting broke out between 6 to 7 am, after which the Burma Army troops fired about ten shells around the area.

The same day, after the fighting, troops from ID 99 and IB 79 (under ID 99) went searching the area, and passed through Ho Ser village. At about 5 pm, about two kilometers southeast of Ho Ser village, they met a farmer called Ai Shwe, who was on his way back from tending his cattle. The troops beat him, then shot him dead.

On April 25, when Ai Shwe did not return home, his parents and fellow villagers went out to look for him in the jungle and around the fighting area, but could not find him.

On April 26 at 6 am, his parents and fellow villagers again went out to look for him, and found his corpse half-buried in a brook southeast of Ho Ser village. He had bruises along the sides of his body, and gunshot wounds in his abdomen. They buried him the next day at 9 am. 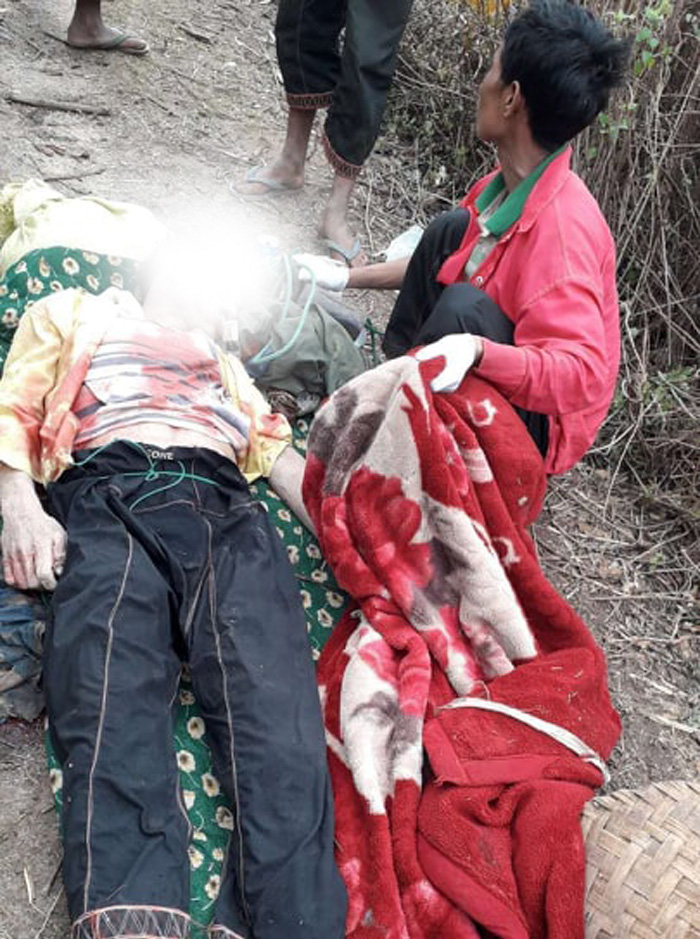 On April 26 and 28 there was further fighting between the Burma Army and the Brotherhood Alliance around the area where Ai Shwe was killed: on April 26 between 6 and 7 am at Pang Wo Laeng and at 2 pm at Kho Moong; and on April 28 at Pang Oong near Kard Law, Wan Mark village tract.