In the last week of June, hundreds of Burma Army troops from five battalions carried out an offensive operation against NCA signatory RCSS/SSA in Kyaukme, northern Shan State, committing grave human rights violations against local civilians and displacing over 600 villagers.

On June 24, the RCSS/SSA informed the Burma Army they would hold an World Anti-Drug Day ceremony on June 26 in Hai Gui village, about 10 kilometers north of the Upper Yeywa dam construction site on the Namtu/Myitnge river. In response, the Burma Army sent combat troops from LIB 256 (under Infantry Division 101), which were guarding the dam site, to block the ceremony. This led to clashes with the RCSS/SSA, which escalated into widespread fighting across southern Kyaukme township, backed up by reinforcements from Burma Army IB 22, 23, 101 and 147.

The Burma Army troops scoured around local villages searching for RCSS/SSA troops, causing residents to flee and hide in terror. On arriving at Pang Gaen village, Burma Army troops saw an elderly couple running to hide in the primary school. They followed them into the school and shot the husband, 58-year-old Loong Suu, at close range, wounding him. The old man staggered out into the school compound, and they shot  him again, killing him.

In the same village, an elderly woman was injured by shrapnel as she ran into her house to take shelter, and a 56-year-old farmer forced to porter for the Burma Army was beaten unconscious because the troops accused him of lying about the whereabouts of Shan soldiers.

During this operation, local truck owners were forced to use their vehicles to transport Burma Army troops and supplies. After the fighting, they were also ordered to transport troops back to their base next to the Upper Yeywa dam site.

The fighting and abuses caused over 600 civilians, mostly elderly, women and children, to flee to surrounding villages, where they sheltered at close quarters in temples, unable to practice social distancing against Covid-19.

SHRF strongly condemns the Burma’s Army unprovoked aggression and abuses, which make a mockery of their unilateral ceasefire declared since May 10, supposedly to combat Covid-19.

These latest violations also highlight the deadly collateral impact of large-scale resource extraction and infrastructure projects in Burma’s conflict zones, which are secured by the abusive, unaccountable Burma Army. We reiterate our demands for a moratorium on all such investment projects until there is genuine peace and devolution of power under a new federal constitution, giving local people rights to protect their lands and resources.

Construction of the Upper Yeywa dam, which began in 2008, has been ongoing during the Covid-19 lockdown. The 280 megawatt hydropower project is strongly opposed by tens of thousands living in the Namtu river basin. Its reservoir will stretch 60 kilometers along the river, up to Hsipaw town, submerging large tracts of farmland and centuries-old indigenous communities 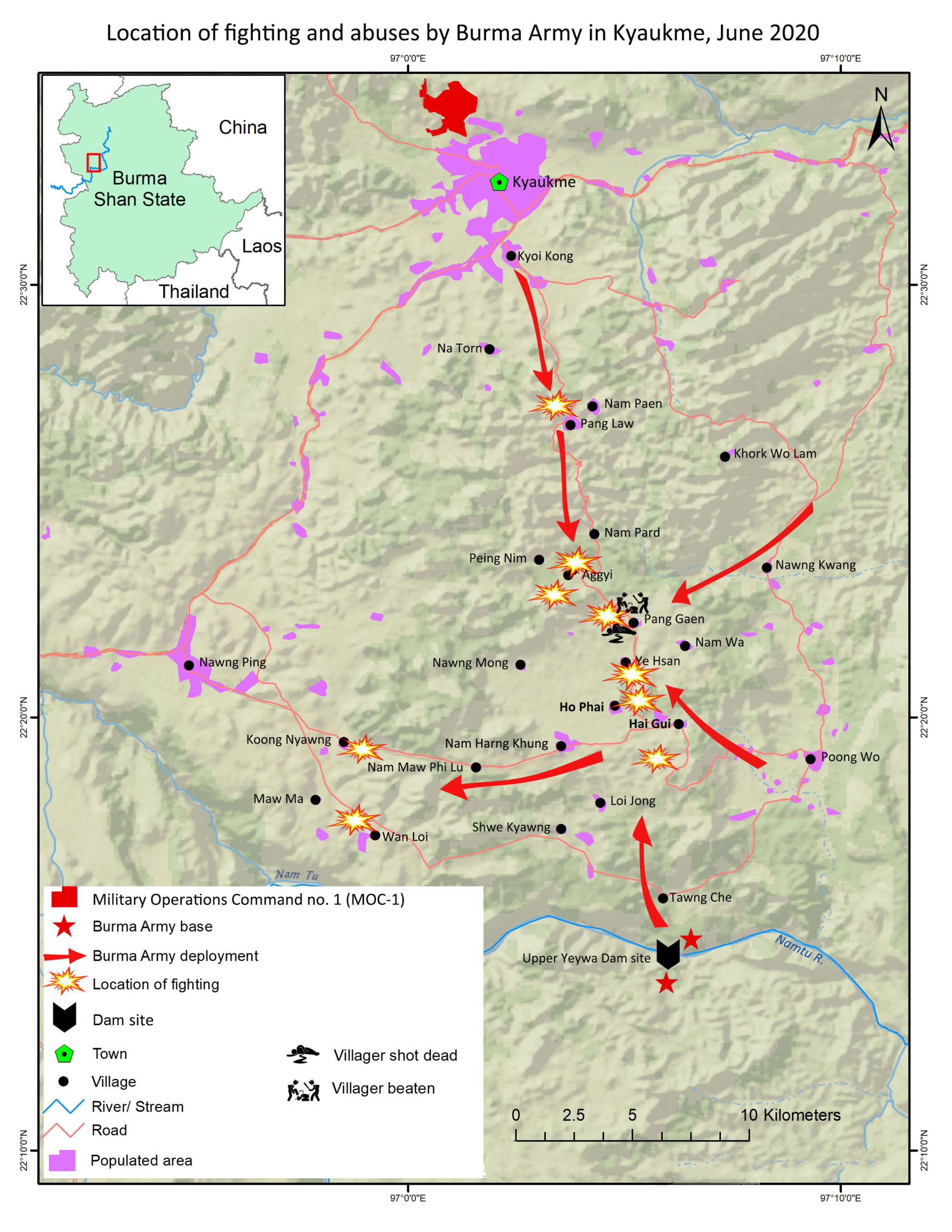 Details of Burma Army operation against RCSS/SSA in Kyaukme

On June 27, Burma Army troops requisitioned a small truck from Hai Gui village, and forced four local villagers to drive the truck and transport their equipment to Pang Gaen village. The four villagers were: Sai Nanda, Sai Panya, Sai Kaw and Sai Jom. They were forced to stay with the Burma Army troops for two days, until June 29, when they were allowed to return home from Pang Gaen village.

In the evening of June 28, Burma Army troops from IB 23, IB 22 and IB 147 were patrolling around Aggyi village. On this day, Loong Maung Kay, aged 56, had been tending his hill-farm outside the village. He had run out of rice to cook, so was coming back to his house to take some rice. As he entered Aggyi village, he encountered the Burma Army troops. They asked him, “Where have all the villagers gone?” He replied, “The villagers have probably run away.” The troops then forced him to carry their military bags and guide them south to Pang Gaen village.

Early on June 29, the troops arrived at the entrance of Pang Gaen, and began shooting indiscriminately around the village. Fearing that Loong Maung Kay would escape, they tied his hands behind his back. They asked him: “Is there anyone in this village?” He replied that there everyone had probably run away.

The troops then saw an elderly couple running from their house in the direction of the village school (see details below). The troops guarding Loong Maung Kay said to him: “Why did you say there were no Shan soldiers in this village? Can’t you see that Shan soldier running away?” They then beat him with a two-foot-long bamboo stick on his forehead, the back of his head, thigh, shin, and body so severely that he passed out at the side of the road. Assuming that he was dead, the soldiers left him.

After the troops had left the village, the abbot of Pang Gaen temple found Loong Maung Kay lying unconscious at the side of the road. When he regained consciousness, he was brought to Kyaukme hospital by a social welfare group. It was learned that he had not fled with other villagers, even though his son had come to warn him that the Burma Army were coming, because he was just a farmer and he didn’t think they would do anything to him. 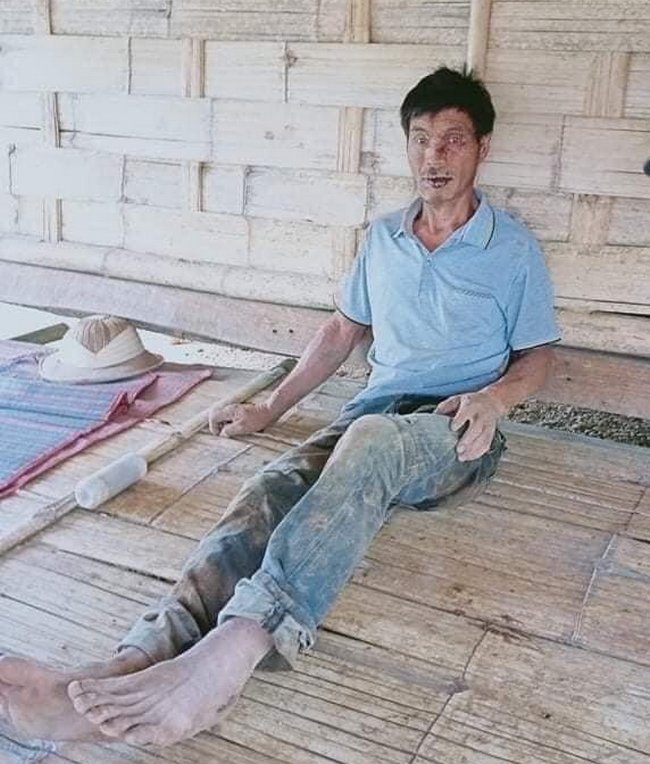 Loong Maung Kay is married to Pa Nang Aunt, with two children. They are from Aggyi village, and earn their living by farming.

On June 30, the Burma Army troops based at the Upper Yeywa dam site requisitioned three small trucks from Nam Harng Khung village and one truck from Hai Gui. The owners of these trucks were forced to drive the troops back to their base south of dam site on the Namtu river.

As the Burma Army troops from IB 23, IB 22 and IB 147 entered Pang Gaen village at 8 am, they saw an elderly couple, Loong Suu and his wife Pa Shwe, running from their house in the direction of the local school. They immediately began shooting at the backs of the fleeing couple, who ran to hide inside a school building. The Burma Army soldiers chased after them, and saw them entering the building. Loong Suu was sitting hiding behind the door. The soldiers pushed open the door and found the couple inside. Loong Su raised his hands and the soldiers asked him, “What are you doing here?” He replied “We were hiding here.” The soldiers then shot at him two times, wounding him. He staggered out into the school compound, and the troops shot him again, this time killing him. 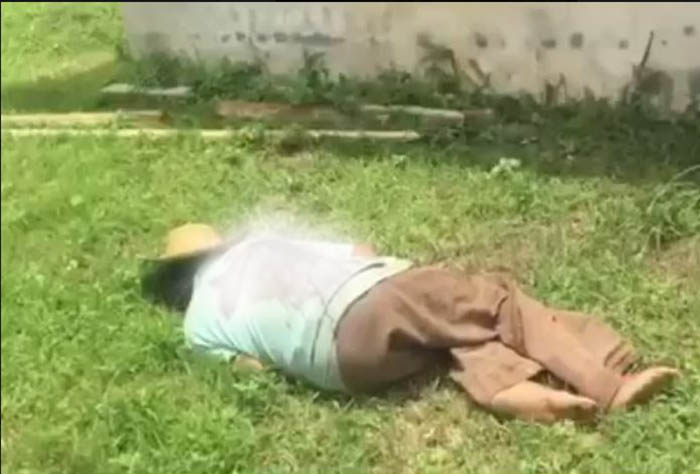 This was recounted by his wife, Pa Shwe, who witnessed him being killed. After this, the soldiers ordered her and another woman to stay at the school.

Meanwhile, the troops shot at another woman villager, called Pa Hsai, in her 50s, who was running into her house. She was hit by shrapnel in her hand and her right buttock. Despite being wounded, she managed to run out of the village. She ran to Ye Hsan village, from where a social welfare group brought her to Kyaukme hospital in a car. 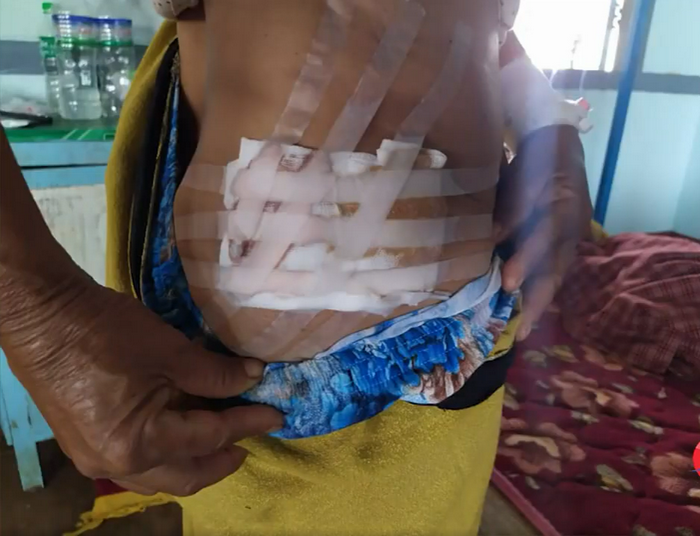 The troops then continued in the direction of Pang Law. When they had left, the abbot of Pang Gaen temple came to Pang Gaen school and found Loong Suu lying dead on the ground in the school compound. The abbot called the social welfare group to come and take Loong Suu’s corpse to Nawng Ping Long Hospital. His corpse was cremated at Nawng Ping Long-Ho Geut cemetery on June 30, 2020 at 1 pm. 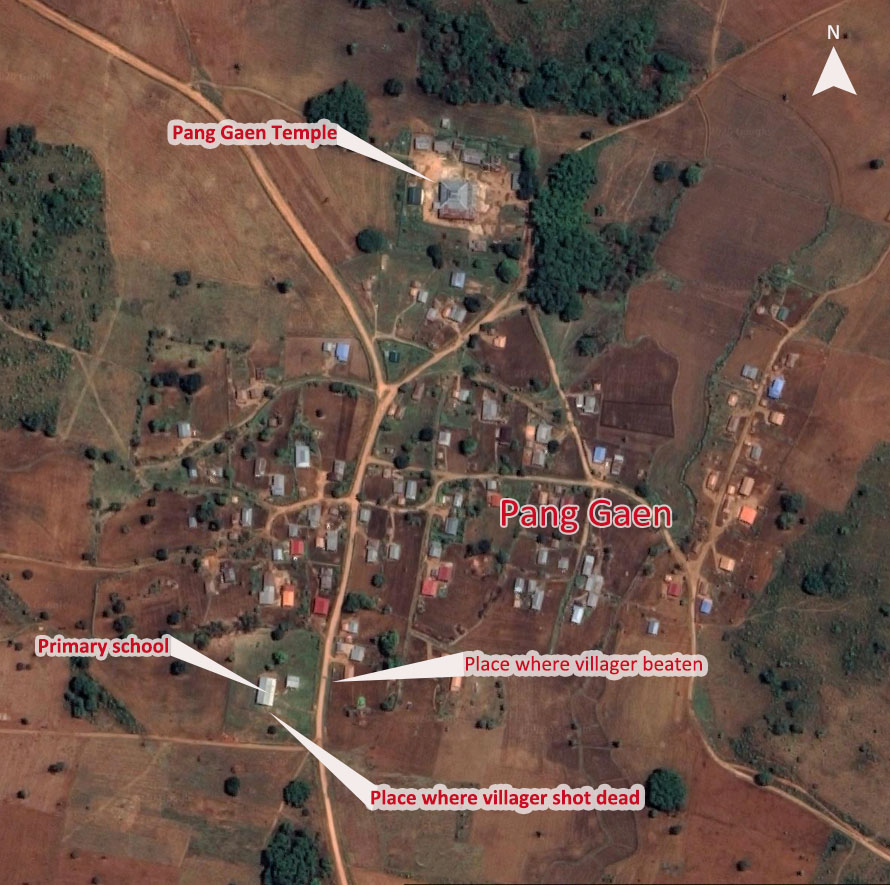 Over 600 villagers displaced by fighting

During the fighting that occurred from June 25 to June 28, about 630 villagers from nine villages fled to take refuge in Pang Law temple (about 200 people) and Nawng Ping Long temple (about 430 people). The villages from which they fled are: Aggyi, Nam Phart, Pang Law, Peing Nim, Pang Gaen, Ye Hsan, Nawng Mong, Loi Goang, and Hai Gui.

Apart from facing shortages of food and other basic supplies, the IDPs were afraid of catching Covid-19, because of having to stay crowded together and being unable to practice social distancing.