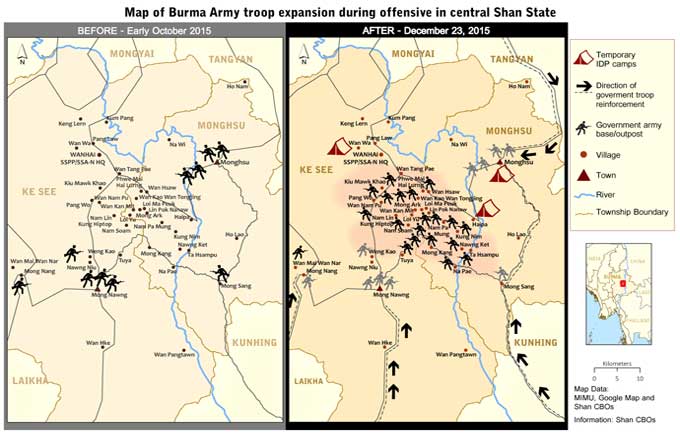 Shan community groups are calling for pressure on Naypyidaw to withdraw troops from areas occupied during their recent offensive in central Shan State, so that displaced villagers can return home without fear of persecution.About 3,000 villagers displaced since early October remain in three main IDP settlements in Mong Hsu and Ke See townships. Despite a lull in fighting since the last week of November, they are unable to return home due to ongoing Burma Army occupation of their villages.Government troops are continuing to loot and destroy local property and food stocks, and are persecuting displaced villagers attempting to return home. On December 13, fifty Ta’ang villagers returning to Koong Nim village, south of Mong Hsu, were forced by armed soldiers to kneel with their hands behind their heads for two hours in the hot midday sun, and ordered not to set foot in the village for at least two months.Since the start of their advance into Shan ceasefire territories in early October, the Burma Army has set up twenty new outposts in frontline areas. Troops from over 14 battalions have camped in and around local villages, dug bunkers, laid land mines, and shot at villagers trying to return to harvest their fields.Under negotiations to end the fighting, Naypyidaw is demanding that Shan troops withdraw from these territories. While offering to “re-deploy” their troops in return, continuing camp fortification and threats against returning villagers indicate they have no intention of withdrawing themselves.Shan community groups are gravely concerned that the failure of government troops to withdraw will mean that about 3,000 displaced villagers will be prevented from returning home indefinitely. Pressure is urgently needed on Naypyidaw to withdraw their troops to enable these IDPs to return home in safety.

Shan community groups welcome the December 3rd statement by the US State Department raising concerns about Burma Army atrocities during the recent offensive, but regret that US trade sanctions were lifted only a few days later, signaling ongoing endorsement of the military status quo in Burma.